Published by Liane Langlois on October 31, 2022

A recent conversation with AMSS Board Member Jon Watchuk turned, not surprisingly, to the topic of safety features in automobiles that have an impact on the safety of motorcyclists. The presence on many vehicles now of Blind Spot Warning (BSW) lights on side mirrors or window frames came about due to the failure of many drivers to properly shoulder check when making lane changes. Jon made a comment that flipped the premise totally on its head.

Rather than seeing the BSW system as a notification for the car driver, that other vehicles are in close proximity, Jon said those little lights are a warning to a rider who may not realize they are in a blind spot and possibly at risk of being hit. I must admit that I have treated those lights as a warning in that same manner, but I had never verbalized the concept. I am always looking in car mirrors or driver windows (I detest tinted driver-side windows) to see if the driver may be reaching for their signal light lever or shoulder checking. If I notice the BSW light come on while I'm looking, it's time to move! 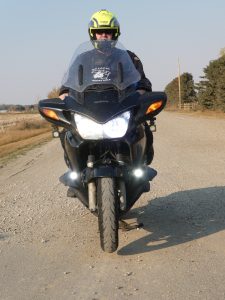 So, a lesson here is to be aware of what's around you and use items like automotive BSW's to increase your safety.

The biggest increase in your safety is obtained by being visible and you can use your own lights to that end. Many motorcycles come with poor headlights. Changing the bulbs to super-bright or LED units can improve this. Adding extra driving lights can also make you more visible.

Two of the switches on your left handlebar can play important roles in your road safety as well. 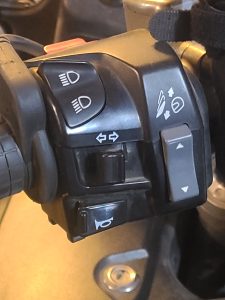 I do a lot of long-distance riding (Iron Butt stuff that can entail riding after dark) and to increase my night vision I have added driving lights to my bike. I have the lower set on all the time and the higher set is wired to my high-beam switch. Whenever I sense a possible lane incursion by another vehicle (traffic slowing for no apparent reason at intersections, oncoming left turners, highway traffic pulling out to pass,...) I flip on my high-beams to make myself more visible. Lane positioning (which I've previously written about) is also an important tactic in making yourself visible. I'll weave in my lane to separate my image from any traffic that might be behind me and to attract the eyes of the other driver. 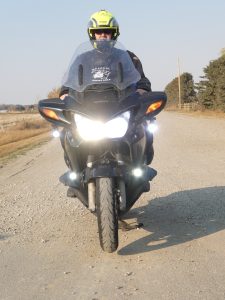 So, another lesson is that Lights Save Lives.

Lastly, the second safety button on your left handgrip is the horn button. I don't know why many motorcycles come with an anemic horn, but the little bleeps are often useless, especially with modern autos being so soundproofed to provide quiet interiors. I have installed a 120 dB air horn on my bike in order to be able to make noise if and when I need  to but, to be honest, I haven't used it in anger in years.

Math provides another reason not to rely on being noisy for your safety. 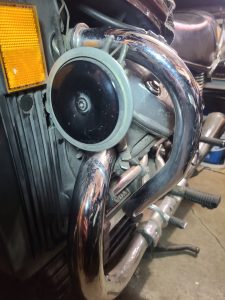 Many OEM motorcycle horns are weak and ineffective

A simple example that everyone should be aware of is the rule of thumb in a thunder storm. Count the number of seconds after the lightning until you hear the thunder and then do some math.

Sound travels at roughly 340 meters/second, so a count of 3 seconds would put the lightning strike (3*340) 1,020 meters distant – say 1 kilometer. (older folks, such as myself, may be familiar with the 5 seconds = 1 mile rule which is equivalent to the metric 3 seconds = 1 KM)

You always see the lightning before you hear the thunder.

Which do you think will get the attention of other road users faster? Light (including reflections from brightly coloured gear) or noise?

Being visible, be that through the use of extra lighting or brightly coloured clothing or both, is one of the best things you can do to increase your safety while riding your motorcycle.

The Things You Learn by R. Bruce Thomas I had some thoughts on topics for this edition and told Liane to expect my submission within a couple of days. A day later and I had Read more…