One of the main points mentioned when it comes to motorcycle safety is the importance of being visible. Oftentimes the conversation is around wearing bright colors, attaching reflective striping to your bike and your gear, and modifying your lighting so you stand out. Lane position is a critical piece of the visibility puzzle.

A buddy of mine, I'll call him Greg, recently got his first street bike. He already had a dirt bike and for years he'd ridden his brother's street bikes in Chicago and he’d even ridden one of my bikes. But having his own street bike meant we could go for rides together.

After our first lunch foray Greg made an interesting comment about the way I ride. He said he never thought to use the whole lane the way he had seen me doing. He was used to being in the left part of the lane while driving his car and just naturally rode his bike in that portion of the lane as well. I, on the other hand, made use of the entire lane.

Riding a motorcycle puts a person in a dynamic environment and the rider has to constantly assess the ever-changing landscape to determine where threats exist. I'll be the first to admit there are no hard and fast rules here but there are a number of things I've learned in 30+ years of riding on the street that others, besides my buddy Greg, may benefit from.

I've been hit twice while riding a motorcycle and both times it was for the simple reason that the vehicles got too close to me, even though I try to keep as much distance as possible between myself and everything else on the road. And it's not just vehicles. When riding on two-lane highways I'll hug the centerline as that provides the most space between myself and any animals that may decide to venture out of the forest.

However, anytime there is oncoming traffic I move to the right and hug the whiteline to 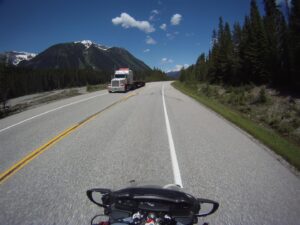 Give opposite direction traffic a wide berth to increase visibility for both yourself and any oncoming traffic.

increase my chances of being seen. Not only does this help reduce the blast of air the opposing traffic is pushing but this lane positioning effectively makes my motorcycle as wide as any other vehicle on the road. If a second vehicle is behind the first they will be able to see me from further away - simple angles at work here. If there is a group of oncoming vehicles keep an eye on them all in case one pulls out to pass. In the event that does happen, hugging the whiteline has increased the space between you and the other traffic and provides a better chance to avoid getting hit.

I will also move over to the whiteline when I am about to pass another vehicle - especially large trucks that can't easily be seen around. If the oncoming lane is empty it is available for any vehicle that may be waiting at a side road or driveway wishing to turn in the opposite direction. I'll pull over to the whiteline and look as far ahead as possible to make sure I can't see anyone waiting to enter the road. Then I pull back over to the center line, ensure the lane is still clear to pass, and make my move.

To reduce the time I spend in the other lane while passing I use what I call a slingshot maneuver. Many people will get right up behind the vehicle they intend to pass before pulling into the oncoming lane and accelerating. I leave a buffer zone between myself and the other vehicle then I accelerate before pulling out. This works in the car and on the bike - the buffer zone is just a lot smaller when riding the bike. To allow maximum space between vehicles I'll move all the way over to the other whiteline while passing and, since I got up to speed before pulling out, I'm back in my lane in very short order.

When going up hills I'll move as far to the right as possible in case an oncoming vehicle is passing another over the crest of the hill. As soon as I've got clear visibility I move back to the middle of the road.

Lane positioning works wonders in urban areas as well. If a vehicle is in the center of the road waiting to turn left that’s a clue to move as far to the right as possible in case an oncoming vehicle is also trying to turn left (which would be right across your path). Where there are cars parked on the right side stay as far left as possible to avoid opening doors or vehicles pulling away from the curb. Also look under the vehicles to detect any pedestrians who may be stepping out onto the road. Move around in your lane when approaching intersections to increase the chance for oncoming traffic to see you against the rest of the flow coming along behind you.

Don't just think of your lane position as being left or right. You also need to be aware of lane position in linear directions as well. Avoid riding in the blind spot of another vehicle and, if possible, never ride beside another vehicle but leave a sideways buffer if unable to avoid a blind spot. Use your speed as well. Most experts generally agree that you are safer if you are moving slightly faster than other traffic than if you are moving slower. The speed differential makes it less likely that you will blend in with other traffic and also reduces the chance of getting hit from behind.

While coloured apparel, bright lights, and accent striping are all good tools to use when riding a motorcycle I was happy to see that Greg had incorporated variable lane positioning into his riding the next time we headed out.  Maintaining buffer space between you and other road users is an ideal way to avoid a painful end to your ride.

Not just for vacationing children by R. Bruce Thomas When I was a youngster and my family went on summer vacations across Canada and into the United States, my siblings and I would play The Read more…

Good for trains, tough on motorcycles by R. Bruce Thomas Wedged wheels, mangled mirrors, pummelled panniers, and broken body parts. The more I read, the more I got freaked out. And I had many months Read more…

Knowing when to Stop

A Cautionary Tale By: R. Bruce Thomas It was 4:30 AM and the smell of burning rubber had been hanging heavy in the cool, early morning air for about 15 minutes as Norm and I Read more…