Published by Liane Langlois on October 31, 2021

Give it a rest

As I followed my new friend Mark along I-15 I noticed he was tapping his hand to the music. What struck me as odd was it was his right hand on his right leg. We were cruising and his efforts at being an interstate orchestral conductor didn't interfere with his ability to pass traffic. I had attended a rally just outside Los Angeles in June 2009 and was now headed for home accompanied by Mark, who lives in Colorado. When we stopped for gas in Baker, CA the secret of his relaxed right wrist was revealed. 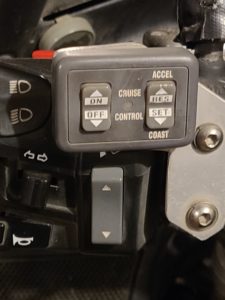 Nowadays many motorcycles come equipped with Cruise Control but that wasn't the case in 2009. Mark had followed the instructions posted online in 2006 by another member of the ST-Owners.com web forum (through which the rally had been organized) so his Honda ST1300 was sporting a full-on Cruise Control system complete with the right handlebar grip and controls from a Gold Wing. I rarely use the cruise control in my automobiles so the thought of cruise control on my motorcycle had never occurred to me.

Fast-forward to 2015 and I had a 24 day, 25,000 km trip planned so I decided it was time to bite the bullet on some wrist relief. I didn't want to go the full electronic version as Mark had done (due to the altitude in CO, vacuum systems aren't very reliable) so I had a friend install a vacuum automotive Cruise Control system on my ST1300. It worked well enough that the big trip was easily handled and now I'm a firm believer in right wrist relief. Check online forums for your make/model of bike to see what creative solutions people have devised. 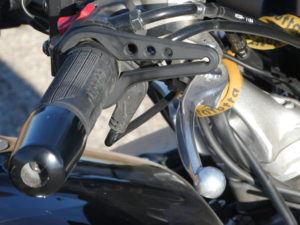 Motorcycle Cruise 2 is an inexpensive throttle lock that works

But you don't have to go whole-hog on a Cruise Control system.

There are many throttle lock solutions that provide relief so every rider should be able to find one they can benefit from, within a budget (some around $20), and easy to install.

I have used a Throttle Rocker (velcro strap) which allows a looser hold on the right grip, as well as a Motorcycle Cruise 2 unit (friction fit) which, with a simple push of your index finger, braces against the brake lever to hold the throttle in position. This works well for short relief and the unit is shaped to release when you apply the brakes (or pull it back off with your finger). If you need a gift for a friend who rides, one of these might be ideal. 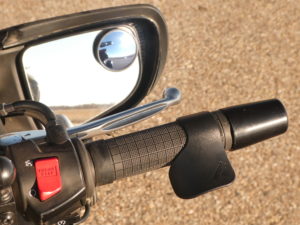 Throttle Rocker is one of many accessories for wrist relief