Published by Liane Langlois on March 2, 2020

Ferries are meant to be enjoyed!

At some point in your touring adventures you will have to make a water crossing.

I'm not talking about slogging your bike through knee deep water like the off-road guys do. I'm talking about ferries. My wife and friends and I have ridden ferries around the world and they are all pretty much the same. Ride on, grab a coffee and enjoy the crossing, then ride off on the other side. 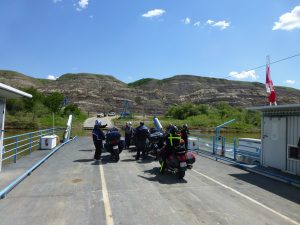 Where they differ is in the size of the body of water they cross.

The Bleriot Ferry crosses the Red Deer River near Drumheller, AB and is a 10 minute affair. It's a small river at that point and, while it can be swift moving, it's quite calm. Park your bike on the side stand, and walk around talking to your pals.

It's basically the same process on other river and lake ferries we've used whether we were crossing the Mackenzie River in the NWT the Peace River on the Shaftesbury Ferry,  Kootenay Lake in BC's interior, or even crossing Puget Sound in WA State. 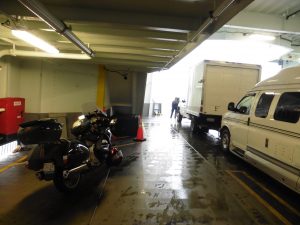 As we move to bigger bodies of water the process changes a little bit.

On the BC ferry from Horseshoe Bay on the mainland to Nanaimo on Vancouver Island a wooden wedge has been provided. The Salish Sea can be a bit rough and the crossing takes a little longer, so placing your bike on the side stand and then jamming the wedge under the bike from the right side helps provide a little stability and ensures your baby won't fall down. 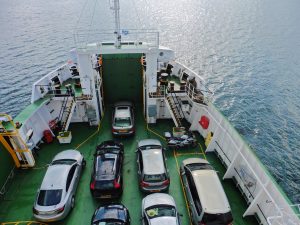 The ferry ride crossing the Sound of Sleat from the Isle of Skye to Mallaig in Scotland moved the process up a notch. After I placed the bike on the side stand a crewperson threw a pad on the seat and then secured the bike to the boat with a single strap using anchors on the deck.

It was a requirement to secure your own motorcycle on the Interislander ferry while crossing Cook Strait between Picton on NZ's South Island and Wellington on the North Island. Anchors on the interior deck were provided, as were tie-down straps, but you had to secure the bike yourself. Use the fork brace up front and passenger grab handles on the back (or whatever other points your particular bike may have. Buy straps and figure this out before your trip) and use four straps as the crossing can be quite rough. Tighten the tie-down straps so you have some compression in the suspension just as you would if loading the bike into a trailer or van. Straps were also provided on the ferry ride to Newfoundland from Nova Scotia. 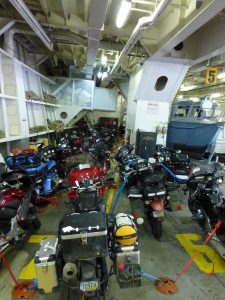 bring your own tie-downs for an Alaska ferry ride

Riding the Alaska Marine Highway System ferry from Bellingham, WA to Haines, AK also required the bike to be securely strapped to the deck since there is open ocean involved in the trip. The big difference here is that the tie-down straps are not provided. And, if you buy ones that are 10 feet long, don't cut them down to six feet to save space in your panniers. Don't ask.

One other nice thing about riding ferries is some of them have a first-on, first-off policy for motorcycles. Since the nature of ferries puts them in valleys or on coastlines there are often some nice curvy roads on either end of the trip. Getting off ahead of other vehicles is a huge bonus.

In all cases, when parking your bike on the side stand, leave it in gear. Ideally, also pack a small strap that you can wrap around the right handlebar grip and brake lever to act as a parking brake.

Anyhow, there you have it. Water crossings explained. Taking a ferry, whether it be for 10 minutes or three days, can be a wonderful experience. It's a good break from the saddle and allows you to enjoy some of the wonderful scenery you often miss while concentrating on the asphalt in front of you.