Published by Liane Langlois on September 1, 2021

Good for trains, tough on motorcycles

Wedged wheels, mangled mirrors, pummelled panniers, and broken body parts. The more I read, the more I got freaked out. And I had many months through the winter of 2009 to remain in that state since Google Street View didn't exist yet to allow me to have a closer look. I'm not sure what it is about train tracks, but they definitely freak out a lot of riders. And they shouldn't. I'm not usually one to worry about such things, but the location in question seemed like an exceptional case. Let's call this one The Monster and we met it in person in Feb 2010.

There are three main things to be mindful of in regards to train tracks. Hit them at an angle – as close to perpendicular as you can; be careful with the bumps and the divots in-between the rails; and make sure you have a smooth right wrist in the wet.

One nice thing is a that a lot of road departments seem to be aware of the fact that railroad tracks can cause issues for motorcyclists and so they will post signs. Make sure you heed any signage. 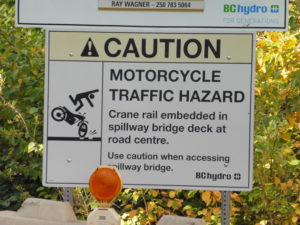 this warning sign at the WAC Bennett Dam in northern BC is maybe a little over the top, but maybe not. 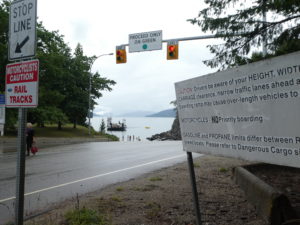 good warnings at the Shelter Bay Ferry Terminal south of Revelstoke, BC

A big concern that I read about in so many accounts of The Monster was the angle of attack. Apparently the road and tracks were running nearly parallel which led to some people getting their front wheel stuck in the groove on the inner side of the rail. Always take the time to adjust your path of travel. Be mindful of other traffic and give them plenty of warning of your movement with judicious use of your brakes and hand signals if necessary. If there are multiple tracks, pick your route carefully. 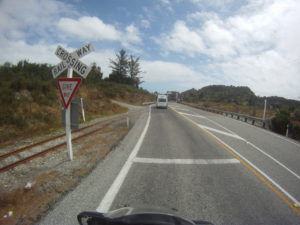 The very nature of train tracks means they disrupt the normal flow of road construction. With the disparate weight of road traffic and train traffic the two will often exhibit different settling rates which can lead to some serious bumps. If you are following other traffic, watch how they cross the tracks and you should get a good indication of how rough the crossing is. If there is no other traffic pay closer attention to the road surface than you normally do. Often, it will be smoother to stay out of the vehicle tire tracks where the greatest road settling occurs and, if you can, stand up on your pegs and use your legs as ancillary suspension. 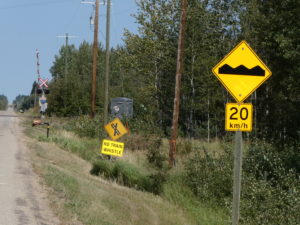 be mindful of signage at train crossings - bumps, no whistle and 2 tracks

Train tracks can also be problematic when they are wet from precipitation so be extra careful and don't make any sudden or abrupt throttle or braking maneuvers.

As it turned out, all of my worrying about The Monster turned out to be for naught and we had no issues. It was a very interesting single-lane, bi-directional highway bridge that was shared with the train, but there was plenty of room to position the bike and then get in between the rails. Some people, judging by the many horror stories, were frightened by the tracks and tried to ride beside the track which would result in the previously mentioned damage to persons and machines. Regular slow-speed practice on your bike should give you confidence to deal with situations like this that require precision steering. 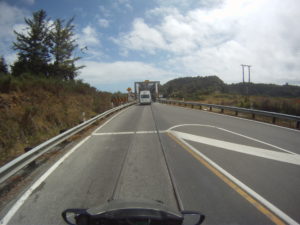 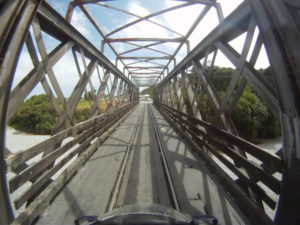 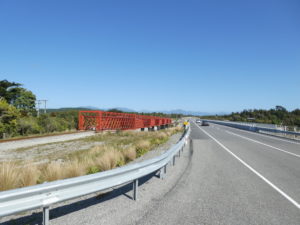