Published by Liane Langlois on October 2, 2021

Not just for vacationing children

When I was a youngster and my family went on summer vacations across Canada and into the United States, my siblings and I would play The License Plate Game. It gave us something to do as the seemingly endless miles rolled by on our way to exciting destinations. Perhaps some of you played this game as well?

I'm not sure if we took it a little further than most but we would often have a book or sheets of paper upon which we had written the names of the Provinces and States and we would put a tick mark beside each place-name once we had seen a vehicle bearing that license plate. Sometimes we would make it a competition and put our initials in place to keep track of who had seen the most. It was fun to learn about these places and try to spy the plate from furthest away from where we were. Our own province was like the FREE SPACE in the center of a BINGO card and couldn't be included in the game since we had one right behind us (and at that time there was a plate in front as well, but those disappeared seemingly eons ago).

I still play The License Plate Game and I'm going to suggest that you do as well, especially when riding your motorcycle.

A big part of keeping yourself safe while riding is an awareness of what is going on in your surroundings at all times. I've discussed visual habits while riding in a few other blog posts so won't rehash the big picture. Rather, we'll concentrate on License Plates and how you may be able to increase your safety by observing them.

Think about when people are on vacation. Unless, and even if, they've spent an inordinate amount of time planning their route, they will find themselves in unfamiliar territory. Perhaps the map they had was out of date; maybe Google Street View was filmed before that road construction project started; the business they had made note of as a landmark could have closed up; it could have been a long hot day on/in their vehicle and they are physically drained; maybe their hotel the night before had lousy beds and they're overly-tired. All of these things combine to make them a fish out of water capable of diverted attention and poor decisions while travelling to their destination. The local people would be wise to give the tourists a wide berth. And they will recognize the fish by driver actions behind the wheel and also by noticing the license plate. 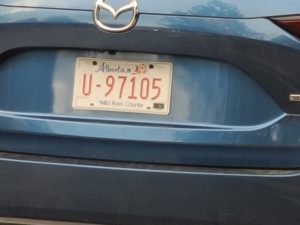 That is why you need to play The License Plate Game. Always. Whether you're on vacation (for those other people who are far from home) or when you're close to home (again, for those other people who are far from home). In addition to the location the license plates are from, try to pay attention to the format. Here in Alberta the normal plate has three letters and three or four numbers but you will see vehicles with non-standard formats (one letter and five numbers, ...) and perhaps a black FLEET sticker. These could be business vehicles or they could be rentals. Give them a wide berth because they indicate that the driver may be in an unfamiliar vehicle and/or unfamiliar territory.

Also, keep an eye on big trucks as they may be from out of province, or it could be a driver on a new route, and most of the same fish out of water scenarios can apply. Plus, they need more room to make turns.

Overall, incorporating The License Plate Game into your riding regimen may not provide the competition with family or friends you experienced when you were young and travelling in the same vehicle, but it may help ensure you get home to them safely.