Published by Liane Langlois on September 30, 2022

Listen up when something just doesn't feel right

It was late at night and the Trans Canada Highway was dark and empty as Norm and I got closer to our destination - Kirkland Lake, ON. I was leading the way and had my high beams and all my driving lights on. While I thought I could see the road clearly something felt a little odd and I cautiously leaned into a long right hand sweeper. And then the road moved.

What the heck was that?!? 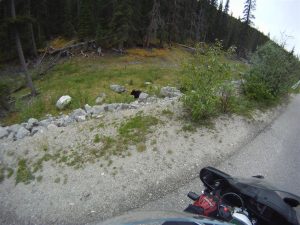 I don't mind seeing wildlife beside the road in daylight

The rather large Black Bear glanced over his left shoulder as he kept moving and I clearly saw his face as I sailed on past. Norm confirmed I wasn't hallucinating and the bear was real. The road hadn't moved, the bear had, and the reveal of the center line was what made me think the road had moved. I don't know what had triggered my senses but I was very happy the bear and I were safely continuing our travels.

In Northern BC, on a ride back from Alaska another year with my wife, I had a similarly eerie experience in the middle of one afternoon.

Nice scenery but my 'little voice' left me a bit unsettled

we were approaching. There was a pull-off, and maybe a garbage dumpster, but again something just felt odd. It seemed like there was something else there that I couldn't identify.

Getting closer and slowing down to 45

As we got closer it became obvious that something was there and, with no other traffic in sight, I slowed down and stayed close to the center line. Finally, when the young moose raised her head, she became  fully visible and I crossed

Ahh, there she is

the center line to give her lots of space as she turned and headed for the trees.

We both take evasive maneuvers

The long puddle she had been drinking from ran parallel to the road and her color and position had made her blend in to the water and gravel and yet the 'little voice in my head' had warned me that something was unusual up ahead.

Ride safely out there and know that it's wise to listen to that little voice if you get a feeling that something just isn't quite right.

The Things You Learn by R. Bruce Thomas I had some thoughts on topics for this edition and told Liane to expect my submission within a couple of days. A day later and I had Read more…