Published by Liane Langlois on December 1, 2020

Things that can kill you!

A dozen years ago my wife and I enjoyed a few days of riding in BC's Kootenay region before heading to Vernon for a visit with her brother and his family. To get from one region to another we had to take the Needles-Fauquier Ferry and then cross the Monashee Mountain Range on Hwy 6. The entire south-central region of BC is a glorious motorcycle playground and Destination Highways BC rates Hwy 6 as the number two motorcycle road in southern BC. They aren't wrong. 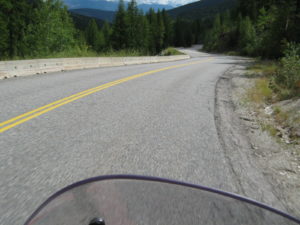 BC's Hwy 6 is full of temptations to push limits. Have some fun but don't overdo it.

Since there are so many excellent roads in the area it was no surprise that there were quite a few bikes on the ferry. We enjoyed a good chat with one group of about half a dozen mostly young-ish sport bike riders from Vernon who had spent the weekend riding out of New Denver and were now on their way back home. Once the ferry docked they quickly vanished and we thought we wouldn't see them again.

But, 26 km along this wondrous stretch of asphalt there is a series of turns, beginning with a sharp left, as the road makes a correction before crossing Galloping Creek. Prior to this left there is a mostly-straight, throttle-tempting, four km stretch of long sweepers and gentle bends with the posted speed of 80 reduced to 60 in spots. For the sharp kink at Galloping Creek the posted speed is further reduced to 50. 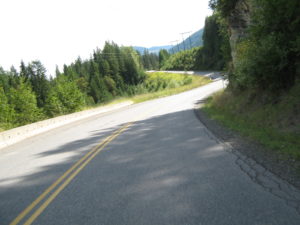 BC's Hwy 6 is full of temptations to push limits. Have some fun but don't overdo it.

sharp left. People were gathered around the fallen rider who we recognized as the oldest member of the group. We pulled over and spoke with one of the other riders who said he had been following the downed rider and, despite the group's rapid departure from the ferry, he felt they weren't traveling too fast as they had slowed for the curve, but the gentleman just rode straight into the concrete. The rider was propped against the barrier and responsive, and one group member had a satellite phone and was on a call with emergency personnel, so we left a bottle of water and continued on our way.

In the November 2020 monthly email AMSS President Liane Langlois reported that there had been 21 motorcycle fatalities in Alberta in 2020 and that 15 of them were single vehicle crashes. Like our Highway 6 rider, target fixation may have been partly responsible.

This psychology web site defines target fixation, which first reared its ugly head with World War II pilots flying into their targets during bombing runs, in the following manner:

"Target fixation is a process by which the brain is focused so intently on an observed object that awareness of other obstacles or hazards can diminish. Also, in an avoidance scenario, the observer can become so fixated on the target that the observer will end up colliding with the object."

Focus. Freeze-up. Loss of control. There are reasons why riders are told to look where they want to go, and there are many things that a rider can fixate on as one pilots their bike through a dynamic environment. It could be a shadow, a bush that's a different color than the surrounding growth, a fallen tree, unexpected movement, something large or small that causes confusion in your mind, or any other item that is a bit out of the ordinary. Staring at it for too long while you try to figure it out can have serious consequences.

Have no fear. There are things you can do to prevent falling into the clutches of stalled vision.

As the above definition makes clear, target fixation makes you blind to the bigger picture. Target fixation has been likened to entering a large dark room with just a flashlight rather than flicking the light switch to illuminate the entire space. It is imperative that you practice constant visual scanning when you are riding and that you become adept at identifying things that pose an immediate threat and things that don't. Being able to pick out the biggest threat at the earliest possible moment will increase your success at planning an exit strategy and avoiding danger.

Develop a routine whereby you check your gauges, your mirrors, close objects, plus distant and mid-range targets. Look to the sides so you can identify threats such as animals coming out of a forest or kids and dogs playing in a yard. You will know that your scanning is effective if you can ride and not be surprised by anything in close proximity.

Move your head as well as your eyeballs as this vastly improves your vision. The human eye can only focus on the central two or three degrees of your visual field (the size of your thumbnail at arm's length) so moving your head helps ensure you are using both eyes to their fullest.

Be aware of traffic patterns and the infrastructure that is approaching. Your traffic may be the cars and semi-trailer units crossing the overpass ahead, if they take the on-ramp to enter the highway. By picking up these targets well in advance you can move to the left and reduce any chance of conflict. While not an essential maneuver it does eliminate a threat and allows you to focus on the next one. Because of the speed at which a rider moves it is best to be proactive rather than reactive to threats one encounters. Recall that at highway speed you travel the length of a football field in roughly three seconds, so keep your head up.

Talk to yourself if you find that you are fixating on a target or you've gotten away from your normal scanning routine. Tell yourself to move your head. Literally, give your head a shake. Force yourself to look where you want to go. And if all seems lost, counter steer and tip the bike over a bit more to turn and avoid a collision. Most riders would be hard pressed to out-ride their tires.

A big part of staying safe while riding is clearing your mind of distractions and riding in the moment. In a chapter titled “What’s the next thing that could kill me?” in his excellent 2013 book An Astronaut’s Guide to Life on Earth, former astronaut Chris Hadfield described the mindset of a fighter pilot clocking 400 knots at 150 feet above the ground as nearly identical to my outlook when riding a motorcycle: “..you have to concentrate on what’s directly in front of you. If you don’t, you’ll die. That kind of intense focus is less about what you include than what you ignore. And by ignore, I mean completely block out; the argument with your boss, your financial worries – gone. If it doesn’t matter for the next 30 seconds, then it doesn’t exist. You need to be able to disregard everything that isn’t going to happen in the next mile or so. There is only one essential question: What’s the next thing that could kill me? Focusing on that thing, whatever it is, is how you stay alive.” (p119).

Now, reading that passage it could be argued that Hadfield is describing fixating on a target, but that isn’t the case. His point is that you have to recognize the dangers, determine the most hazardous, and use all of your training and skill and experience to avoid it before dealing with other things. If your mind isn’t along for the ride, and you aren’t scanning the environment you are traveling through, and you aren’t picking up the imminent dangers, then there is no way to avoid them. If there is a danger (including if that danger is your own poor visual focus), concentrate on it, overcome it, and on to the next thing. A stationary concrete barrier on the side of the road doesn’t pose an imminent threat, unless you fixate on it. Make note of it if you must, and then move on to the next thing.

When my wife and I met Hadfield and had a chance to talk with him at the 2014 Jasper Dark Sky Festival he responded with an emphatic “No!” when I asked if he’d ever ridden a motorcycle. I figure I could've easily died about a million times in 40+ years of riding, but focusing on the ride and having "What's the next thing that could kill me?" as my mantra has prevented me from riding into objects or putting myself in harm's way unnecessarily. Perhaps you too will find it a valuable phrase to keep in your mind while riding and it will drive your visual habits and reduce the chance that target fixation will ruin a nice ride.