Not just a winter thing

Ok, show of hands. How many are sensing a theme here?

Full points if you guessed H2O.

We started with rain, then water crossings, and now we have snow. But at least winter's almost over and you'll be riding soon. So "Why snow?" you may ask.

Well, riding in the mountains is one of the most amazing experiences a person can have. Having shed the cage, the visual experience is unhindered by a roof and corner posts. Look all around. Enjoy the scenery, and also the nice weather, but be prepared for the weather to change.

My first experience with constantly changing mountain weather came on July 1, 1982 when two buddies and I were riding down to Kalispell, MT. It was late morning when we headed west on Going-to-the-Sun Road in Glacier National Park and, before we got to Logan Pass (2,026 m / 6,646 ft), our cloudy morning turned into near-white-out conditions. Luckily, the snow didn't accumulate on the pavement and the road remained wet. This weather event seemed to set the tone for most of my subsequent encounters with the Continental Divide.

On June 2, 2009 I left a friend's place in Grand Junction, CO and headed up through Aspen, home of the late John Denver, to Independence Pass (3,687 m / 12,095 ft). As the picture shows, there was still a lot of snow at the top but the road was bare and dry. Independence is the highest paved crossing of the Continental Divide in North America and the third highest paved through-road in Colorado. Rain began to come down while I was taking pictures and then snow starting falling as I began my descent. 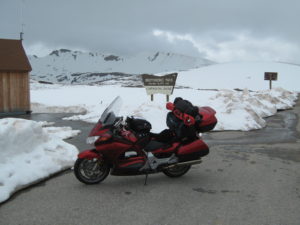 Independence Pass still has a lot of snow on June 2 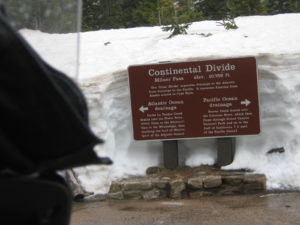 My wife and I were returning from a trip to Anchorage, AK on July 11, 2013 and, as we approached Grande Cache on Hwy 40, we crested a hill to find ourselves riding through about 5 cm of hail for nearly 100 m. Luckily, at least one vehicle had plowed through this already and I had just happened to be lined up with the tire track. This was quite an experience as the wheels of the bike bounced off the frozen sides of the rut which was very beneficial in keeping us upright.

On the September long weekend in 2015 my wife and I took the long way to Fairmont Hot Springs. It was a lousy day all around. The high temp was 10C and it was quite windy and rained for most of the day. When we got to Crowsnest Pass (at 1,358 m / 4,455 ft the second lowest crossing of the Continental Divide in the Canadian Rockies) the dash display dropped to 1C and snow started falling. The flakes came down for about 30 minutes but did not accumulate on the road. We really enjoyed soaking in the hot springs that weekend. We've also had 1C temperature riding between Radium and Lake Louise on the August long weekend.

So, the big lessons here are to be prepared and to expect sudden weather changes when riding in the mountains. All of these incidents happened during peak riding season but they weren't reason enough to stop riding. A heated jacket liner, heated grips, or extra layers are all important items to have if you want to ride a motorcycle in the mountains. A display of the ambient temperature is also something I feel every motorcycle should have as that information can be critical in deciding if you will continue your ride or not.