Published by Liane Langlois on August 4, 2020

What's in your pannier?

Twenty-sixteen was the 100th Anniversary of the formation of the National Park Service in the United States and my buddy Norm and I thought it would be an appropriate year to tackle the Iron Butt Association's (IBA) National Parks Tour (NPT) Master Traveler Award, which requires visiting at least 50 National Parks/Historic Sites in at least 25 States/Provinces within a 12 month period. We also decided we wanted to go for the Gold which requires park visits in California and Florida plus Maine (or northeast of there in Canada) and Alaska, and that we would do this in three weeks, to maximize vacation time of course.

And then the trip just grew, the way these things do sometimes, with the addition of a few other IBA challenges such as the Trans Canada Quest (Vancouver to Halifax in less than 90 hrs). The final plan called for riding ~29,000 km in 3 weeks.

On day 11, Norm's fuel pump went Tango Uniform as we were passing through Greenville, SC. This turned out to be both a blessing and a curse. The good part was that the delay meant we weren't in Illinois and Indiana when 15 tornadoes ripped up a lot of areas. The bad part was the two-day repair delay meant that our plans to complete the IBA 48 States Plus! and 10/10ths challenges went out the window.  We could still complete the National Parks Tour though and I spent most of one day in the hotel conference room with my GPS software and maps spread all over as I selected new parks to visit and planned a new route. Temperatures in Arizona were in the high 40's (!!!) so my new plan cut across the middle of the country with a drop down to Lava Beds National Monument in Northern California before we would head to Alaska.

The key to success on big trips like this is to keep moving as much as possible at a consistent pace. Excessive speed is not a requirement nor is it accepted by the IBA, therefore, making efficient stops crucial which include short, quick gas stops, regular snacks, the ability to drink while riding, and utilizing fast-food restaurants. Subway is a favorite because they are just about everywhere, provide a consistent product - either a sandwich or salad bowl, and are usually quick in and out. Stopping for fuel at a truck stop is a good plan as they quite often have multiple dining options and a large selection of quick-to-grab hot food items in-store - truckers have the same need for a consistent pace. Carry some Imodium in case you have a bad, off-brand food experience.

In addition to the water and energy drinks I've incessantly gone on about I'll pack Clif bars or other protein/energy bars, trail mix, almonds and cashews, and I'll grab an apple or two from the hotel when we depart in the morning. NOTE: apples are fruita-non-grata when crossing the US/Canada border whereas Oranges seem to be OK. An insulated bag works well to keep some of these items fresh on hot days. There is another item that works wonders and which you may already be familiar with since we're all getting closer to our best before date. Nutritional drinks such as Boost or Ensure are a terrific quick picker-upper if you grab one at a gas station and down that before saddling up again. Or stuff one in that insulated bag for a quick roadside pick-me-up later on.

On the third day after the repair was completed we left Hot Springs, AR, rode the Pig Trail Scenic Byway in Arkansas, visited parks in Arkansas, Missouri, and Kansas, and arrived in Burlington, CO after covering a distance of ~1,400 km. We'd run through a wicked storm in western Kansas and were ready for a warm meal when we checked in to our hotel. And this is where the food I pack took a turn for future trips.

As I took care of plugging in all of my electronics, Norm visited the front desk to inquire about dining options. Apparently, at 10 PM on a Saturday night, there isn't anything open in Burlington, CO. He did, however, return with an extra large bag of popcorn from the snack shop in the lobby.

So, on every trip since then my packing checklist includes microwave popcorn (at least this would be fresh and warm), instant oatmeal, and instant soup. Every hotel room has a coffee pot that can heat water for the oatmeal or soup, and most hotels have a microwave as well. I pack my favorite tea and packages of hot chocolate. I pack a real fork and spoon and a collapsible bowl and have my Leatherman multi-tool for a choice of knives. All of this takes up very little space in my luggage.

Epilogue - A trip of this magnitude is not undertaken by very many riders but I hope the lessons learned can make even short trips better since there is always the chance of an unfortunate incident that could affect your best-laid plans. While we had some problems that made us adjust our plans en-route, any trip that you get home from is a successful one. We completed the IBA Trans Canada Quest and the National Parks Tour Master Traveler Gold certifications while covering 25,040 km over 20 riding days on the trip in 2016. In 2017 we successfully completed the 48 States Plus! challenge (all 48 states plus Alaska in 10 days) but we haven't yet attempted the 10/10ths again (10 days/10 thousand miles). And we also haven't had to eat cold, pre-popped popcorn at the end of the day ever again either. 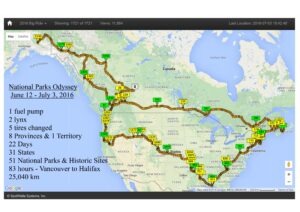