Published by Liane Langlois on October 1, 2020

One of the ladies who worked with my wife confided one day that riding on a motorcycle was an item on her bucket list, and she wondered if I would consider taking her for a ride. Mary came home and informed me of the request. Let's call this lady "Bonnie", and I knew her from corporate social events. Sure. I have no problem taking passengers. We arranged a date.

When Bonnie arrived I had the bike on the driveway and we went over a number of items such as how the bike operated and how it was different than a car (like leaning in corners), footpeg use (keep your feet on them whether we are moving or stopped), mounting and dismounting (and only after being told I was ready), grab handles, proper behaviour (no big sudden movements, try to be aware of what is going on, look into a corner if you want but don't lean as that could throw off my control, etc).  Then we got her all geared up in Mary's riding gear.

Wheels on the ground, side and center stands retracted, bike started but not in gear, both feet planted, front brake lever pulled in, and then Mary gave a demonstration of proper mounting/dismounting technique. Once that was complete I let Bonnie know I was ready for her to get on. She aced it. We made sure that we could hear each other through the helmet communication system. Things were starting off well.

NOTE: We have a top-box on our sport touring Honda so there is no risk of a passenger falling off the back. If you have a sport, naked, cruiser, ADV, or other style bike without a backrest of some sort you may want to have your passenger hold on to you and understand how they should brace against the gas tank, or where to put a hand on your back, when stopping.

I told her it was time to depart and to hold the grab handles if she wanted. I checked for traffic, I was at an angle - not perpendicular - to the back lane, so it wasn't much of a lean to begin our journey, and then I released the clutch. And that was when the screaming started.

"We talked about that. I have to. That's how a motorcycle turns."

"OK, well, now you've experienced that so please try to stop screaming in my ear."

"OK. Just try not to do that so much. And whatever you do, DON'T TAKE ME DOWN GROAT ROAD!"

It was almost like she was making a request and, I mean, come on, you already knew I was planning to take her there, right? Up and down. 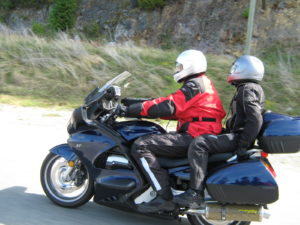 I grew up near Groat Road and did all the foolish things when I was young and still thought it was spectacular. After riding on fantastic roads around the world I find Groat to be boring. It does nothing for me, but it was the one place I knew I could find some curves for Bonnie. Going straight would be an insult to the bucket list.

We now live about 30 minutes from Groat and there were some traffic circles and corners on the way and I was able to talk to Bonnie and reassure her so she had adjusted to the leaning to some extent by the time we got to Groat. She survived. My eardrums survived. We got back home in one piece. And she could check 'motorcycle ride' off her bucket list.

On August 22 this year the AMSS twitter account re-tweeted a Motorcycle Safety Foundation (MSF) tweet with a few tips about taking a passenger on a motorcycle. The tweet mentioned adjusting your suspension and checking tire pressure plus the fact your passenger should be wearing protective gear. It also included a link to a Passenger Quick Tip pdf on the MSF web site. This is good reading if you are going to carry, or be, a passenger but it seemed to miss some key points.

AMSS President Liane Langlois recently acquired another bike. Jon Watchuk, Director of Corporate Relations for AMSS, picked Liane up to take her to get the bike. If you don't already know, Liane has twice ridden on the Bonneville Salt Flats, hitting 122.984 mph (197.924 km/hr) in 2014 and 155.210 mph (249.786 km/hr) in 2016. Jon was a racer until a serious incident at Stratotech Park in 2012. So, both are experienced riders but Jon still gave Liane "the talk" including an intro to the features of his bike since it is different than bikes she rides. He told her where to put her hands during acceleration and deceleration. He explained some hand signals he may use and what he would be trying to communicate. Plus more. I remember using hand signals or yelling over my shoulder back in the day. If you regularly carry a passenger nowadays a comm system makes a huge difference in facilitating two-way conversations (“waterfall – 3 o’clock high”) and allowing the rider to keep both hands on the bars - especially in emergency situations like deer coming out of the trees (“3 deer – 10:30 fast”), or when carrying a "Bonnie".

It may be a coincidence but Jon and I both have a small amount of experience at being a passenger on a bike. We understand the increased vulnerability. We both covered many of the same things in our pre-ride talks with new pillions. Familiarize them with your bike, let them know to keep arms and legs inside the vehicle at all times, ensure you both understand how to communicate. As the rider, put both of your feet down when you stop to increase stability, especially when your passenger is on/off-boarding, and ride responsibly.

Even experienced riders need the pre-ride talk before riding as a pillion. Hopefully they won't try to be backseat drivers. And you should also practice the pre-ride familiarization talk in case you need someone to ride your bike if you can’t ride or you bought another bike and need a lift or many other scenarios where you might hand over the keys.

There is so much more including being mindful that a pillion and full luggage may increase the tendency for some bikes to lift the front wheel under acceleration. Don't head out on a cross-country trip the first time you have a pillion; do some short trips first to make sure you are both comfortable and have all the proper gear. If you usually wear a backpack get some luggage rather than making your passenger wear the backpack (see the Princess post). Get your passenger involved by having them help with your pre-ride lighting check. And finally, let your passenger know that, aside from safety issues, their comfort and enjoyment is at the top of your priority list so if they need to stop to stretch or for a bathroom break it is OK to ask. 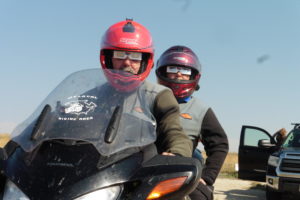 Ready for a total solar eclipse. Riding to experience something special is better when shared.

It's over 40 years since Mary first climbed on a bike behind me. She had some experience riding small bikes while growing up on a farm, but being a passenger is different. We had the pre-ride talk. We did some rides around the city before taking the 160 km trip to the farm (the last 10 on gravel). She's always had the same quality gear as I do. There were the child-rearing years when a motorcycle wasn't family transportation so I rode solo, but she has logged over 130,000 km as my perfect pillion including two Iron Butt Association Saddlesore 1610 km days. We've done numerous three, four, and even five week vacations on the bike. Being comfortable on the bike makes it easy to cover the distance if you need, for example, to pull back-to-back 800+ km days to get to the Black Hills to see a total solar eclipse. Needless to say, we operate in sync while riding.

And that is what you want with a passenger. You don't want surprises for either of you. Riding a motorcycle has risks that other forms of transportation don't. A passenger is trusting you with their life when they get on the back of your bike. Respect that and do all you can to make sure they will want to get on it again. Sharing a passion with someone special makes it that much more enjoyable for both of you. I enjoy riding and being able to block out the world as I concentrate on the road and all the things that could cause us harm, but there is nothing like the feeling of a spon-hug (spontaneous hug) from Mary to let me know that she is also enjoying the ride and the scenery and spending quality time together.