Let me ants you a question.

Khan you hear me now?

The day had begun like most; we'd risen, had breakfast, packed the bikes (our friend Mac was along with us), and hit the road. Our usual pattern had us riding for about an hour and a half before stopping for a mid-morning snack and coffee. An oddity this morning occurred about an hour into our ride when Mary flicked a small ant off of my shoulder. And then another. And then she noticed a couple on the inside of her visor. It was difficult to understand where they were coming from as we were cruising toward Rotorua at 100 KM/Hr and Mac didn't seem to have this problem.

I've been wearing earplugs while riding for about 15 years and wish I had started way earlier in my riding career. Once you lose your hearing there is no getting it back short of hearing aids.

There are all kinds of earplugs one can choose from. I went with custom fitted plugs from Costco. The pair is attached to each other by a small vinyl cable and come in a nice pouch to store them in when not riding. My big mistake was getting them in black.

On one of our first rides after getting the earplugs, before they were part of my regular gearing habits, we stopped for fuel in Strathmore, AB. I took off my helmet, pulled the earplugs out, and draped them over my tank bag. We were approaching Trochu, heading north on Hwy 21 after gassing up, when it hit me that things seemed a little noisier than they should. Rolling back the tape in my brain I remembered that I had removed my earplugs at the gas stop. Further review of the memory banks confirmed that black earplugs draped over a black tank bag were easy to forget when their use hadn`t been fully assimilated into my process. By this time, as you might imagine, they were no longer draped over the tank bag. I went back to Costco and ordered a new set in hi-vis yellow. 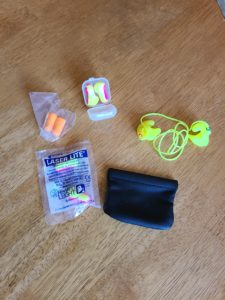 There are a wide variety of earplug types and styles to choose from.

I've found that wearing earplugs made a huge difference in the way I felt when riding. All the background white noise was filtered yet I could still hear traffic and the music from my in-helmet speakers. I wasn`t as worn out at the end of an Iron Butt Ride. Communication with Mary and other riding friends did not suffer, yet I couldn`t convince her that earplugs should be part of her ATGATT. Mary carried earplugs and used them at night. Something about somebody snoring. But she felt that she didn`t get as much wind noise sitting behind me and resisted wearing them on the bike.

Fast forward to Feb 2020 and that ride from Taupo to Rotorua in New Zealand.

Mac and I settled at an outdoor table while Mary visited the facilities when we stopped for our coffee break. While we talked, I noticed a couple small ants on the table near my helmet. Odd. I swept them off the table. More appeared. I picked up my helmet and shook it. About 30 ants fell out onto the table. I started smacking it and there must have been over 150 of these tiny critters fall out of my helmet. Recalling that Mary had seen some inside her visor, I picked up her helmet and gave it a couple good smacks as well. Maybe only 30 or 40 came out.

We had stayed the night before at some lovely cabins at a Holiday Park in Taupo, where we had also stayed the week before - but in a different cabin. Last night's cabin had a nice bush outside the window at the kitchen sink. My helmet had been on the kitchen counter overnight to charge the internal comm system. Mary`s helmet has a removable outer comm unit so her helmet had been on a shelf with just the comm unit getting charged on the counter. I had brought Mary`s helmet to the countertop when I noticed there were a few ants on the counter close to my helmet and the sugar packets sitting in a bowl near the window, and quickly tossed our helmets onto the bed. Too late.

Do you recall the 1982 movie, Star Trek II: The Wrath of Khan? Do I have to mention Khan Noonien Singh (Ricardo Montalban), Pavel Checkov (Walter Koenig), Captain Terrell (Paul Winfield), and the Ceti Eels? If I need to say any more, you likely haven't seen the movie. If you have seen it, you are likely already squirming.

Imagine the reaction my dear wife had when she joined us at the table and I told her of our helmet hitchhikers. Yes, she'd seen the movie. Yes, she was freaked out.

We both made sure to give our helmets a few more good whacks to ensure no more ants came out and then, before we mounted up to continue our day, Mary dug out her earplugs - just in case. As the day continued Mary expressed her surprise that the earplugs didn't detract from her ability to hear our conversations and she also remarked how nice it was to have the reduced wind noise.

New Zealand is pleasantly void of large animals such as deer, moose, or bears that can cause issues for riders but, thanks to those tiny ants and a healthy fear of Khan, Mary is now a dedicated believer in the effectiveness of earplugs, on multiple counts. How about you?