Knowing when to Stop

It was 4:30 AM and the smell of burning rubber had been hanging heavy in the cool, early morning air for about 15 minutes as Norm and I rode through the Kaibab National Forest in Northern Arizona. I mentioned to Norm that something was very weird about this situation. The smell seemed totally out of place since there weren’t any skid marks on the pavement and there was no smell of brake pads. As we neared the bottom of a winding, 11 km, 300 m descent, we rounded a curve and had to stop quickly as a large cruiser lay across the middle of the road.

We were participating in a big group ride heading for Mexico and the conversation at dinner the night before had mainly focused on the forecast of 40C weather later in the day. Everyone thought it was a great idea to leave early in the hopes of arriving at the destination before the heat hit. Google maps says it should be a 10 hour trip. People started heading out around 3 AM and within 30 minutes of our 3:45 departure we encountered the smell. 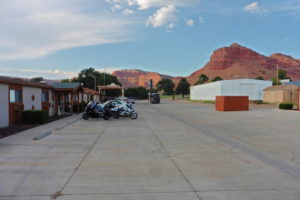 The scenery near Kanab, UT is very impressive

I have comfortably ridden across New Mexico and Arizona in 44C temperature because I have a cooling vest and skull cap that keep me cool. I also have a Camelbak hydration bladder in my tank bag so I can drink while I’m riding, since staying hydrated in the heat is very important. As such, I wasn’t terribly happy about the early departure as I’d rather not disrupt my normal sleep routine too much, but I went along with the majority. We were also starting from Kanab, Utah (1,515 m elevation) where the scenery is quite spectacular and an early start meant we would miss seeing a lot of it. 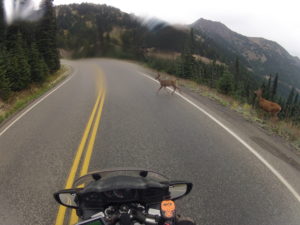 The road had climbed to 2,400 m before the long smelly descent, and it was quite chilly. The rider was shivering as he stood beside his bike and was obviously in shock. He told us he thought he had hit a deer about 10 miles back but he didn’t go down so kept riding. Once we had righted his bike and moved it off the pavement, an examination seemed to confirm the deer strike. The metal front fender was crushed, it had folded itself in the middle, and was rubbing on the tire. This was the source of the burning rubber smell. He had ridden so far that the fender wore a groove right through the center of the tire at which point he could no longer control the bike, and it fell over. He may have been stopped for 10 minutes but the rubber was still hot to the touch. 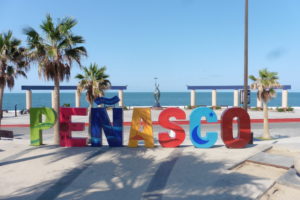 Puerto Penasco, Mexico is a nice little city on the Gulf of California.

He was also dressed lightly for the afternoon heat and not the morning chill. We encouraged him to put on all the clothes he had. There was no cell service and when a few other riders showed up, they said they’d stay with him. I left a bottle of water and we saved the GPS coordinates before departing. Even though there was 'civilization' along our route we had to ride for about 90 minutes before we could make a call to report the crash and request a tow truck.

We arrived in Mexico at 2:40 PM and had to wait for our rooms to be ready.

We did not beat the heat.

There are quite a few lessons in this.

If you are going to be riding in hot weather, be prepared for it. Dress for the heat when required but also dress for cooler temperatures, especially at higher elevations. Mesh gear should not be your first choice.

If you hit something, stop and check your bike, and yourself. If this rider had stopped right away he may have been able to bend or remove the fender and prevent it from ruining his tire and crashing his bike. This also means you should carry at least a rudimentary tool kit. Or wait for someone who has tools.

Ride with a buddy when possible. Having a second brain on the job, especially if you are tired and stressed, can help improve decision-making.

If you prepare and take adequate precautions, riding should be safe and enjoyable.