And other slow speed maneuvers

One of the young fellows at the office had purchased a Kawasaki Ninja 300 near the end of the previous riding season and had done a small amount of riding before winter. He was confident that his years of driving a car would make it easy to ride a motorcycle and entertained thoughts of buying a BMW S 1000 RR over the winter. I suggested he spend some time learning to ride before going for one of the most powerful street bikes around.

During the current riding season he got out more and learned that riding is a lot different than driving his car. Even with nearly a full riding season under his belt he had encountered something for the first time and he came to ask me for some advice. How to ride up a hill?

He had stalled his bike on a busy hill on his way to work and wanted to know what he should do? Should he stop completely in slow traffic or try to creep along as the traffic moves up the hill? Very good question and I can't think I've seen this addressed anywhere.

The answer is, as is so often the case, it depends.

Hills are a great place to practice your slow speed riding and other skills. If traffic is moving slowly it is best to feather your clutch and keep moving with the traffic, or someone might squeeze in front of you when a gap opens. When traffic stops you have to stop as well. This gives you opportunity to work on other skills.

Most people have a preference as to which foot (or both) that they put down when they stop. You should be comfortable putting either foot down in case you go ride in a country that drives on the left where the camber of the pavement means it could be a long way down for your left foot. You also need to watch the surface of the road to ensure you aren't about to put your foot into a hole or rut which could cause you to tip over. 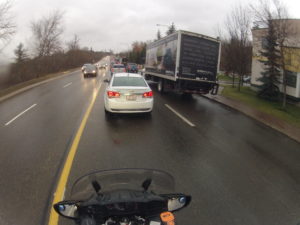 long, busy, hills like this are great for practicing slow speed riding in heavy traffic

If you are stopped on a hill for a while (long light, collision,...) you likely won't want to sit there holding the clutch. In order to let go of the clutch you'll need to pop into neutral with your left foot. This means you need to be holding the front brake and have your right foot planted. Then you'll need to pop into gear when it is time to start moving. You still need your right foot on the ground and need to work at coordinating your clutch, front brake, and throttle to make a smooth, slow start. Hold the front brake as you let the clutch out just to the point of engagement. You'll feel a bit of a tug as the bike tries to move. Now you can slowly let out the brake as you roll on the throttle. This takes practice to be smooth and ensure you don't stall. If you can swap which foot is on the ground and hold the back brake, things are a bit easier since you have less to do with your right hand. 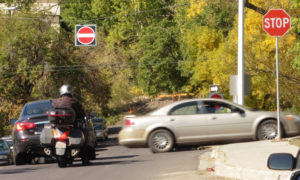 which foot? Here, my buddy has his right foot planted but it depends on the road surface, which way you're going, how long you're stopped for, etc

One of my favorite corners coming out of the river valley in Edmonton is shown in this photo. When you approach this corner the road has a slope to the left in addition to being uphill. Putting your left foot down results in the bike leaning to the left. This is not a good position for those short of stature or on a heavy bike, and leaning to the left is not how you want to be positioned if making the right turn that also goes uphill. So you need to use your right foot to hold the bike.

Upon starting to move you need to work the clutch, front brake, and throttle as described above as well as leaning the bike over to the right into the uphill slope to get around the turn. Slow speed cornering is another essential skill here.

Riding up a hill in traffic shouldn't be an issue if you have practiced your slow speed riding skills on a level surface. Feathering the clutch to control your speed is an essential skill to have when you ride and, with practice, hills won't be problematic.

Now that you’ve mastered all of that you can look forward to the next electronic marvel coming to motorcycles - hill hold control. This system utilizes a number of sensors to determine if the bike is stationary on a hill. When it is time to start moving you can release the brake lever/pedal and the system will hold the brake for a short period of time so you can more easily start moving. Sounds like a wonderful addition to the arsenal of electronic gadgetry available on newer bikes.

Until you buy a bike with hill hold control, though, just keep practicing your hill starts and slow speed riding skills.