Dress for the Slide, Not the Ride

How Gear Can Save You

There are many different reasons that we ride. Some just to get out of the house. Others seek the freedom, empowerment, and for stress relief. No matter what your reason is, there is always someone in your life that hopes you make it from point A to B and back again, even if you don’t know where point B may be.

As riders, we trade in the safety of a ‘cage’ for the exhilaration of that dotted yellow line inches from our feet, to smell the fields more prominently, and for the overall excitement of riding. Trading the steel frame around us for all of this freedom, we need to compensate for our safety. Whether an incident happens through no fault of your own or because of your error, the right equipment can minimize the damage to your body.

Marty, our trusted AMSS VP, learned that you didn’t even need to be riding to potential injury himself. He had just stepped off his Honda Gold Wing in his garage when he lost his footing, and the 800-pound motorcycle threw him directly at his parked car. With nowhere to brace himself, he hit the car door directly with his head. Thankfully he was wearing his helmet and wasn’t harmed.

Skullcap, half helmet, brain bucket, or whatever else you have heard them called these helmets provide less coverage than a full face helmet. Rory was out for a ride when he was hit by a car that ran a yield sign. As you can see from the picture, even with a full face helmet on, he was pretty banged up. He is convinced he would not be here today to celebrate the birth of his twin boys had he not been wearing a full face helmet.

Encountering animals on the roadways are a part of our riding experiences as well. Casey suffers from a brain injury that affects his memory after he hit a deer on a ride. The paramedics had to revive him and later after the accident when he met with the RCMP that responded to that call they could not believe they were standing there talking with him. The one officer explained that Casey did not have a pulse when he checked.

Jackets meant for motorcyclists are typically made of leather or specialized man-made fabrics like Cordura or Kevlar. The jackets frequently include dense padding on the elbow, spine, and shoulder regions. With technology today, you can stay cool in the summer and still protect your body when riding. Josh credits his jacket to saving his skin and protecting him from some severe road rash when he was struck by a truck on a gravel road.

Jim wrote us to credit all his gear with saving his life after a dodge mega cab turned left in front of him. He remembers waking up 4 days later with numerous injuries but is thankful he was wearing his Icon boots, Draggon jeans, Stryker vest, Icon jacket, gloves & helmet. Because of his vest, as you can see in this picture, Jim only suffered minor damage to his torso. Make no mistake, he suffered a great deal but is thankful for the gear that saved him from a much worse fate.

There are times when we misjudge or make a mistake that not only bruises our egos but our bodies as well. Daryl was enjoying a beautiful day out at the track when instead of feathering the brakes after rolling off the throttle, he spiked the lever causing the front wheel to lock and wash out. The impact of his head hitting the ground knocked him out cold and left his bike on top of him. Daryl knows that his leathers, boots and gloves sustained only slight scuffs, and aside from 7 broken ribs, a fractured collarbone and scapula from the impact, he had no abrasions or road rash whatsoever. 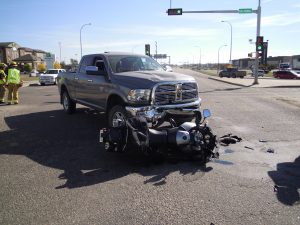 These stories are from everyday riders like you and I. Some rookies and other experience riders wrote in to share their experience and their belief in ATGATT (all the gear, all the time). It is easy to think that we are just going up the street or that nothing will happen to us, but the fact of the matter is, every single time you get on your bike you should be thinking about wearing the gear designed to protect you. When you think of heading out to enjoy the freedom that riding offers you, dress for the slide and not just the ride, every single time.

Author’s Note: I would like to thank all those that shared stories of their accidents and how they believe their gear saved their lives. This article could have been much longer, but I didn’t have space for all the incidents. Please know that each of you that shared has touched my heart and I genuinely appreciate you taking the time to email me. I would also like to thank Jim, Rory, Cassey, and William Vaverk for the use of their photos.