Published by Liane Langlois on September 1, 2020

Lock it or lose it

My wife was on the verge of crying when I answered the phone. She couldn't find our van. With errands to run after work she'd driven to the transit station in the morning rather than walking. Once she got off the train at the end of the day there was another vehicle in the space where she'd parked. I drove over to get her, and our next stop was the police station. The police called us about a week and a half later having found the vehicle in a back lane where it had been left, the front end crumpled, after colliding with a large garbage dumpster. The passenger door lock had been punched out as was the steering column mechanism and it had obviously been used in a number of thefts as there was a lot of clothing and electronic items strewn throughout. Once the damage was repaired, I bought The Club Steering Wheel Lock.

Kryptonite - bike security was a concern even back in the 1970's

Usually I'm proactive and it struck me as rather odd that the purchase of this security item was only made after our vehicle had been stolen. One of the initial farkles I bought after getting my first bike 25 years earlier had been a Krytponite wheel U-lock (https://www.kryptonitelock.com/) and I used it all the time.

I recently went looking for data but when I was unable to easily locate stats online I asked AMSS President Liane Langlois if her contacts in law enforcement could provide the info. She asked Calgary Chief Neufeld (a rider himself!) who had Deputy Chief Tawfik respond with the numbers I wanted. In Edmonton she asked Staff Sgt Hrycun for the data, and the numbers were quite interesting from both cities. From 2015 to 2019 Calgary averaged 215 stolen motorcycles and Edmonton averaged 125. Up to the end of July in 2020 the numbers are close to half in each city, so another average year appears to be shaping up.

What this means is, if you park your bike outside, I believe that practicing some sort of security should be high on your list. The first thing to do is to always lock the steering. The next thing is to use a wheel lock, a disk lock, or a great big chain like the rental company in England offered me.

The Xena Disk Lock has a 110dB motion sensitive alarm

On my bike I always carry a disk lock of which there are many varieties. These days I use a Xena lock with 110dB alarm (https://www.xenasecurity.com/) since just locking it might not be enough. I've had this lock for quite a few years, and it came with a carry pouch which doesn't seem to be the case now. Once I've attached the lock, I always put my keys in the pouch (see below) so the first thing I remember to do in the morning is remove the lock. Other locks have a cable to attach to your handlebar (see below) as a reminder that the lock is in place. You definitely don't want to attempt to ride away with the lock on your disk. 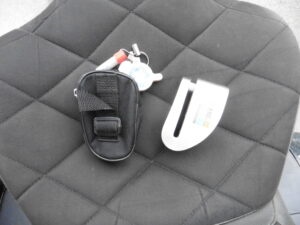 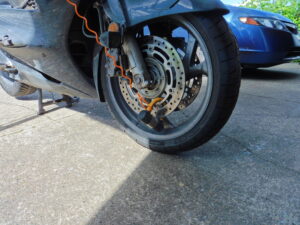 Another important aspect of my security is a bike cover. When I go on trips, I put the cover on the bike every night. Not only does this prevent curious eyes from being attracted to your bike and deters people (kids) from sitting on it, but it also provides some protection from inclement weather. I can't count the number of times I've had frost on the cover but a nice clean dry seat underneath.

Always ask. You never know where you'll be allowed to park your bike

When on big trips one of the first questions I ask at the front desk is "Do you have a special location for motorcycle parking?" Quite often they will allow me to remain parked under the front veranda where it is visible from the front desk, or they may have designated motorcycle parking, or an area of sidewalk that is not part of the usual vehicle parking. Some of these areas are specially monitored with security cameras. 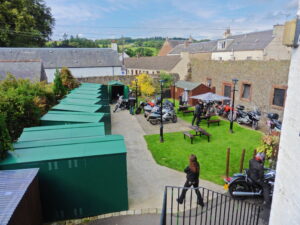 The Buccleuch Arms Hotel in Moffat, Scotland provided the ultimate in bike security

I have a garage that my bike lives in when I'm at home and that provides extra security. If you don't have a garage, then use a lock and cover every night. When we did a tour in Mexico recently most of the hotels had a locked area for overnight bike storage. Probably the best hotel security we've experienced was at the Buccleuch Arms Hotel in Moffat, Scotland, where they had a large gate on the yard and individual garages for each guest's bike. Knowing your bike would be there in the morning was a good thing as the riding in the area was spectacular. 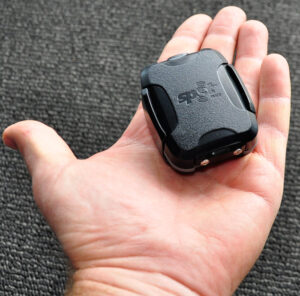 The old saying goes that locks just keep the honest people from stealing your stuff and that may be true. If you lock your bike, cover it, and park it under a watchful eye there is no guarantee that it still won't get stolen. If that is the case, then there are modern methods to help get it back. SPOT (https://www.findmespot.com/en-us/) and FIN Security (https://www.finditnowusa.com/) are two companies that I am aware of that offer GPS enabled devices that will let you track your bike in real time should it wander away from where you parked it. But back to that bit about being proactive, the device has to be installed on your bike first.

Hopefully you've found a few options here to keep your bike safe and in your possession. Don't wait until it's too late, and don't just take my word for it. My wife will tell you that the trauma of a stolen vehicle is something to be avoided if at all possible.