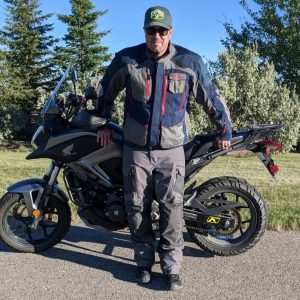 Adam Calver is not only a longtime rider and AMSS member, now board member, he is also the creator behind Head On First Aid which offers motorcycle first aid courses and motorcycle first aid kits amongst other services.  He met the AMSS team at one of the motorcycle shows in Calgary and immediately felt that AMSS was a fit for him as a Corporate Member based on the strong beliefs and values that aligned with that of Head On First Aid.  A few years later, in 2021, he became a board member.

Adam loves the freedom and joy of being on a motorcycle along with the community and comradery between riders.  You can find him frequently in the Kananaskis area for some off road adventures.  He has travelled into BC around the Kootenays and hopes to ride down to California through Washington and Oregon.

He has owned a few bikes over the years including a Yamaha FZ6R and FZ-09, a Honda CBR 1000RR and NC750X.  He recently purchased a Triumph Tiger to add to the collection.  Right now, he says his favourite is the Honda CBR 1000 RR.

Adam is part of the Calgary based directors.